Who would have thought that biodiversity could have a colour? Who but Pantone® would even think of assigning a specific hue to such an abstract (and topical) concept? With only weeks to go before the announcement of the official colour of 2023 (in December), the Pantone Color Institute has decreed that biodiversity is pink, that particular hue of pink we all – almost unconsciously – associate with bubble-gum. 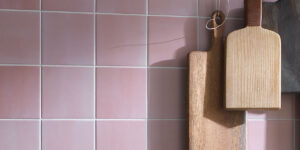 The colour pink does appear frequently in nature, though not exactly the newly elected hue of bubble-gum pink: the pink pigments in flowers attract pollinators and absorb particularly harmful wavelengths of sunlight. Through primarily celebratory in intent, the election of a colour as ambassador of biodiversity should at least serve as a reminder of the alarming speed at which the Earth’s biodiversity is shrinking. Offering us an opportunity to emphasise that Italy’s ceramics industry has always been strongly focused on environmental sustainability, as recalled in the advertising campaign recently launched by Confindustria Ceramica.

Having noted this, it is likely that bubble-gum pink will become a very popular colour, rapidly making its way into all kinds of products and industries (dyeing, textiles, fashion…). In the field of interior design, however, it is considered a rather bold colour, to be used in small doses, as for example in accessories and details; a hue that has never (and may never be) particularly trendy.

It does, however, offer an excuse to rediscover a colour that comes in a very large number of variations, some of which have always been popular with architects and interior designers (such as antique pink, coral pink, powder pink and peach). Our catalogue includes numerous collections incorporating shades of pink in their colour palette.

Senren proposes a desaturated, dusty antique pink, just a little brighter than the hue included in the Summery collection. An entirely different version of antique pink is offered by the Safari collection: a dense, cloudy hue of bold character. The 16 colours in the Shibusa collection include a powder pink that is soft without being sugary, luminous and textured thanks to the matt finish characterising the series. The classic shade of pink in the Elevenuance collection is especially versatile, because of its particular hue and its small square size; whereas the Lingotti collection includes a very light, almost rarefied hue of pink which tranquilises and lightens the surfaces to which it is applied. The hue coming closest to the colour elected by Pantone® to symbolise biodiversity may be the pink in the Kraklé collection: the colour Glicine expresses similar exuberance, with the cracked effect typical of the series.

Our collections include so many colours that it’s always easy to find one or more that go perfectly with pink. An infinite number of colour palettes can be constructed around pink, but if we had to make a suggestion, it would be to explore modern colour combinations such as pink with sage green or beige, with baby blue, sand or ochre, white or pearl grey.

On our Pinterest boards you will find many inspirations with pink in our collection.

Share them and don’t forget to tag us with #tonalitetile